Everything is object of enchantment. That sentence describes the artist’s attitude towards the world and himself, the two spheres offering the subjects for his work.

A young man explores his surroundings, the celestial realm, love and intimacy as he registers his own responses, thoughts or affects.  This is the theme of the early photo-conceptual works.  Their style catches the eye: the articulation of expression.

Hereafter multiple themes unfold themselves.  Different series are devoted to explorations of the variable male archetype and energy.  The theme is elaborated in photographs of a human personage in a poignant situation, and in drawings and sculptures with a more abstract mood.  A melancholy figure is central to one series.  In another series the protagonist is a daydreamer.  In yet another one a highflyer is stuck in a precarious locus and it is unclear how he got there.

The artist brings together objects, substances and ideas and often also words or expressions in vibrant and often mysterious constellations.  His world view is based on a natural attraction to romance and Dichtung, fabulation is his preferred modus operandi.

In the late sixties, Pieter Laurens Mol (*1946 in Breda, Netherlands) embarked on a unique artistic career producing conceptual works in a variety of media: photography, painting, drawing, sculpture and installation. A substantial part of his early photographic oeuvre, dating from the seventies and eighties, consists of images with the inclusion of a self-staging artist. During the nineties the human figure gradually disappears from the scenery and there’s a shift noticeable to more known traditional genres such as landscape and still life, yet these images could equally be experienced as metaphorically charged statements on the “condition humaine”. The photographs deal also with significant concepts such as “falling”, “loss” or the romantic topos of “searching”. Failure, both heroic and comical, characterises many of his works. As Mol himself says, art is about the quest to find pictures for an “extreme existence”. His “artistic life” represents such an existence, one which he invites the viewer to share, although the artist’s life is nothing but an image of man’s “creative life” per se. This creative life is based on physical (or other, higher) principles, which his works explore and poeticise. In doing so, the artist seems to rely on making use of the Surrealist method of combining as he develops his so-called “photo sculptures” that often refer to non-representability or rather the impossibility of depicting reality in pictures: words and images belong to separate systems of perception which always only refer, as substitutes or replacements, to a reality they themselves cannot embody (Magritte, 1967).

In general, the artist’s photographic aim is not to represent reality but rather to visualise ideas. Mol investigates the semantic conditions of pictorial projection, ironically playing with emotional projections in line with Bas Jan Ader’s “Romantic conceptualism” (Jörg Heiser).

With a light twinkle in his eye, Mol is thus able to address the tension between performance or staging and the drama of great feelings. Sounding out the limits between the artistic and the everyday object, he also brings into play how museums, galleries and art critics define their aesthetic position. The classic contrast between Romantic inwardness and conceptual rationality can thus be seen to run through Mol’s works.

Pieter Laurens Mol is not interested in an art that sees itself simply as a platform for staging one’s own artistic subjectivity. On the contrary, he is devoted to looking at and reawakening the familiar – and doing so within art’s sheltered realm, in which the smallest adjustment can influence how life, the world and our own position in the great scheme of things are assumed.

Art in a vacuum

Can we accept that wonder is a way of breaking us free from the imprisonment of the self; of helping us to connect with the world and each other in new ways. Wonder is an antidote to loneliness, to self-absorption and the dead hand of seeing things as we have always seen them. It is a gateway to the God of wonderment.

If this is so, the we explorers after wonder must surely take at least a glance at art and its claims and powers to see what wonderment we can find there. I ask Timothy Radcliffe about the powerful relation between wonder and art. He tells me that art is a barrier against literalistic ways of seeing the world and as such is an attempt to reclaim a poetic imagination at the heart of life.

I would say that human culture is essentially poetic. Humans are always hungering for a plenitude of meaning which is beyond our full grasp. We reach out in poetry, but also through novels, painting, films etc. Wonderment is at the essence of our humanity. But it has been undermined in recent centuries by a temptation typical of modernity, which is what William Lynch SJ called ‘the univocal mentality.’ We see contemporary culture weakened by various forms of fundamentalism, from the nationalistic and ideological fundamentalisms so characteristic of the twentieth century, scientism and its mirrored twin, religious fundamentalism.

I am in Brussels visiting my favourite conceptual artist. Pieter Laurens Mol uses sculpture and photography. His themes are tied-up with the wonder of science and its relation to religion. He sees art as a way of mediating between the two – of creating a new space. He’s had a troubled relation with religion – as a boy he was sent to Catholic boarding school run by monks. ‘It was sometimes cruel and I was lonely,’ he tells me.

His study is neat in the extreme. We could be in the presence of an architect, which isn’t that surprising as his father was an architect.

But in some ways Pieter is a kid at heart – his art is peppered with rockets, and vapour trails from aircraft and moonlight. Pieter’s work holds in tension the both wonderment and escape and the depths of depression. 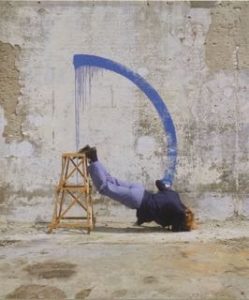 Can you have one without the other? Blue Defeat (above) seems to say that there is only one trajectory. The artist fallen like a squashed fly. But as I have found out, wonderment is the close companion of the other side of human experience. We feel wonder all the more keenly when we know how low it is possible to go.

Perhaps that’s why Pieter’s work so often features the planet Saturn with its long association with melancholy. When we escape the bounds of earth and aim for freedom the dread that we might be pulled back down or be on a fools’ errand must strike any thinking person.

I am Dutch and we Dutch have a reputation for being level and perhaps given to gloominess. The physical conditions of the Netherlands have had an influence on all Dutch artists. The weather is gloomy. There is constantly damp in the air. We do not have the azure skies of California. But if you look at the work of the Dutch masters you would think otherwise. For them, the skies are blue and there is that incredible magical Dutch-light – with crispy clouds and beautiful skies. Just look at Vermeer. But the truth is they made it all up. That isn’t what it is like here. They wanted to create a world that was lively, optimistic and wonderful.

They wanted to hint at wonder and to manipulate the world, but perhaps that what art is for.

Where do we get to the crux, we wonder-seekers? Pieter tells me an amazing story about how he wanted to solve all of the problems of art, and life. He wondered if the secret of finding wonder was to create a place of nothingness where it could then grow. If you could clear away life’s complications, overcoming all conflicts, then perhaps something that explained everything might emerge.

When I was 18, I was very caught up in the adventure of art. I wanted to find a place that could get rid of all dualisms – a place that was whole and of itself. In the mid 60s I was very influenced by Yves Klein. In the year 1958 he had put on an exhibition called “Le Vide” (The Void). It was an empty gallery space, nothing to see – no art, really nothing, just space. He was a mystic. I became obsessed with the idea of creating an absolute space and to overcome all complexity. A place of wonder where everything connected without distraction.

I began to wonder if I could solve all the problems of art by making a space like this. And it occurred to me that I should make a place of nothingness where soul and spirit should meet. I decided to create a small glass sphere. I would have all the air sucked out of it and I would then carry it around. It was as though I would be walking around with the answer to all of arts problems – with the solution, a clear space.

I was probably influenced by Torricelli who invented the barometer. He actually used an ‘absence of air’ instead of a true vacuum. But then I began to be tortured by this idea. Because in our material world what we call a vacuum is never really a place with nothing in it. There is always something there. – even if it is an invisible radiation still unknown to us. So in an absolute sense nothing doesn’t exist, because there always might be something. I was disappointed, I suppose. But the rest of my career has been about finding, creating and sharing that place of true wonderment. I have been looking for a positive alternative to the vacuum all my life.

Pieter’s quest may have failed but he is onto something. The vacuum, the call of nothingness, will never be the answer. But the desire to find a place where things can seem whole is a noble one. But then the vacuum is in one sense never empty of everything, or at least empty of the possibility of containing something.

Art may be a reflector of wonder and a creator of a space for wonderment. It helps us to see the world anew and its connections and mysteries. But perhaps without a different focus then it will always be like that vacuum carried around as part of an experiment with nothingness. How do we reach outwards to something or someone that might help us live a life of more purpose and constant wonder that feels more like space dancing than vacuum-making.

Therefore Jesus said again, “Very truly I tell you, I am the gate for the sheep. 8 All who have come before me are thieves and robbers, but the sheep have not listened to them. 9 I am the gate; whoever enters through me will be saved.[a] They will come in and go out, and find pasture. 10 The thief comes only to steal and kill and destroy; I have come that they may have life, and have it to the full.

I am not unaware of the calls that a dedication to wonderment might be a selfish pleasure – a call to withdraw from the world into a world of sensation. But we can’t really sustain this when we see the super-charged life that Christ seems to be calling us into.

Christ’s famous words don’t skirt round the problem. We are all surrounded by thieves and robbers. We can all fall of the path and be waylaid – by temptation, but harmful worldviews, by the presence of intentional evil. But Christ’s call is that with him around we can live a life that is marked by a kind of spiritual, emotional and practical abundance that will transform everything.

I think that wonderment is part of that equation because it helps us to see that we aren’t trapped in ourselves and that there is something surprising, beautiful and amazing at the heart of the messy business of being alive. Wonderment is a gift. It is a sudden understanding or perception that the life lived to the full is possible.